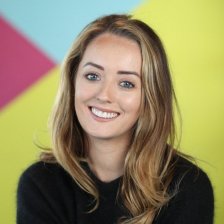 Niamh (pronounced Neeve) O’Connell is senior business development manager at CasperLabs. Niamh is a blockchain expert and has been at the forefront of the blockchain evolution since 2016. She is a co-founder of BlockW, a female-led initiative providing a platform for communication, education, and the discussion of ideas relating to careers in blockchain. Earlier in her career (2016), Niamh served at Deloitte and was a founding team member that set up and scaled the company’s blockchain lab for Europe, Middle East and South Africa. She was also part of a small team that set up ConsenSys Ireland in 2018 and eventually joined ConsenSys U.S in 2020, working with Treum to build out a SaaS blockchain supply chain platform and co-lead the company’s customer adoption division.
Additionally in 2018, Niamh worked on the first few production-grade blockchain applications for consumer-packaged goods and in the food & agriculture industry. Niamh was named 2018 “Blockchain Leader of the Year” at the Dublin Tech Summit and has co-authored numerous blockchain studies. Niamh holds a Bachelor of Business Studies from Trinity College Dublin and a Master of Science in Management Consultancy from University College Dublin.

You can find Niamh O’Connell speaking on...