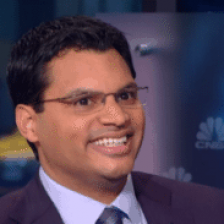 Manny passionately backs and builds startups, and has been recognized for his work in the entrepreneurial community by Inc. Magazine as one of the 33 Entrepreneurs to Watch of 2016 and 2014 SF Angel Investor of the Year. In 2016, Manny was named Hispanic Shark of the Year by the California Hispanic Chamber of Commerce, Hispanic Angel Investor of the Year by California State Controller John Chiang, Silicon Valley Equity CrowdFunding Pioneer by Menlo College, and was invited to the White House by the Obama administration.

A TV personality, Manny is an investor shark on CNBC’s primetime series “Make Me A Millionaire Inventor” and was recently featured as an investor on the Oprah Winfrey Network’s (OWN) “Mind Your Business”.

You can find Manny Fernandez speaking on...

How to kick start your innovative idea