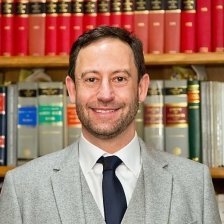 Marc is the Managing Partner of Ellul & Co (www.ellul.gi) and a Notary Public.

Marc began practising in London in 1993 and established himself in Gibraltar in 1995. He was a general practitioner during his early career, undertaking criminal and civil litigation, property, corporate and private client work.  He now mainly practises as a corporate, funds, tax and financial services lawyer and leads the firm’s fintech team.  He is actively involved in blockchain work in Gibraltar advising on the set-up of regulated cryptocurrency exchanges, token sale (ICOs) and on the establishment of digital asset investment funds.

For the past 10 years, Marc has been a member of the Gibraltar Finance Centre Council which works together with the Government to develop Gibraltar’s finance centre.  In 2014 he was Chairman of the Company Law Reform Committee which brought about extensive changes to the Gibraltar Companies Act.