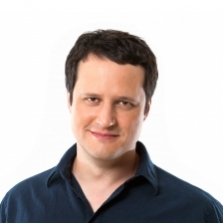 Douglas is the whitepaper author and chief architect of the Telos Blockchain Network, a public blockchain built on EOS.IO. He led the grassroots, global launch group of 130 people who, with no token sale, created one of the world’s most decentralized and advanced governance blockchains–the largest such mainnet launch of 2018.

Douglas is the founder and CEO of GoodBlock, a dapp development company specializing in third-generation blockchain and EOS.IO. GoodBlock was a member of the EOS Mainnet Launch Group that launched the EOS network in June 2018 and remains one of the most experienced developers in EOS.IO, having implemented several system-level EOS.IO improvements in addition to application-level development. GoodBlock is an active Telos block producer and leads the Telos Core Developers, the largest such developers group of any EOS.IO chain.

Prior to blockchain, Douglas worked as a creative in the filmed entertainment and game industries. He has written and directed award-winning feature films and designed and produced mass-market games for Disney, Pokémon International, Warner Bros., and other AAA brands. He has also worked as a creative for a number of technology companies. Douglas lives in Seattle.

You can find Douglas Horn speaking on...