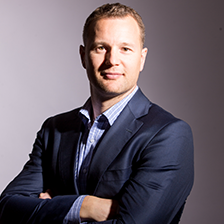 Christian Wentzel is a serial entrepreneur with a Wall Street background. He is Chairman, Co-Founder and former CEO of Solar Provider Group (SPG), a multinational solar development company with more than 50 employees across 6 countries and 3 continents. SPG has been awarded Toronto’s fastest growing company in 2014, and Canada’s fastest growing energy company in 2015 and 2016 by Profit 500. He is also Chairman and Co-Founder of KB Racking, and prior worked at Credit Suisse in Energy M&A and Goldman Sachs’ Power Group, both in NYC. He is a member of YPO, carries a CFA designation and received an MBA from London Business School as well as a BA from Columbia College, Columbia University.